MANGYONO.com - This was taken in the fields. I found the eggs on the stems of rice . cluster is about an inch long and a half inch wide . Egg size is about half a grain of rice . Golden apple snail

Golden apple snail, popularly known as "golden kuhol'' [Pomacea canaliculata Lamarck], is one of the major pest problems in rice production. In 1989, the Food and Agriculture Organization of the United Nations estimated that yield tosses owing to this pest ranged from 1% to 40% of the planted area in the Philippines, resulting in huge production loss. 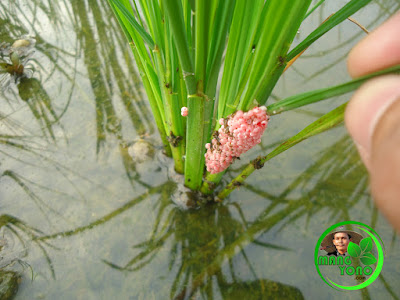 To control this pest, many farmers resort to the massive use of synthetic molluscicides that are expensive and broad spectrum, affecting non-target organisms including human beings.